Hey Carefix, I've thought about the same thing happening here in the US. Maybe it will at some point but for the short term, I believe that the sun's action (or rather inaction) is still going to be the main driver. Here's why: during times of low solar activity, the jet streams weaken and become wavy. They are tightened when we receive solar flares. As the poles migrate further I think there is a chance that our shared thought will come into play. Are you familiar with Ben Davidson's work?
Top

Hi carefix,
The important thing for both England/Western Europe and the Eastern US as far as the stationary meridional lobe (being a low pressure system trough, meterologically speaking) is the phenomenon commonly known as the "Greenland Block" -- a high pressure ridge. If a Greenland block is in place, the meridional lobes, or low pressure troughs, also remain stationary.
However, even during a GSM, weather will continue to be a dynamic system so "stationary" patterns will not remain stationary for beyond a certain time-frame. There will likely be 3 month stretches where the blocking pattern is exhibited 80% of the time. And 3 month stretches where it is more fluid.
So, if you take a sequential aggregate of 3 month periods over several years, the 80% times will appear more often or less often resulting in a stretch of a few years where conditions are particularly harsh followed by a stretch of relatively milder years.
It's that variability that puts stress on planning for food production. It's a "just when you thought it was safe to go into the water again" kind of thing.

Here's a pair of charts that show the variable nature of weather during a GSM period and how it can fool all of the people some of the time ---
Onset of the Little Ice Age: The temperature trend was down but some years falsely hinted at recovery. The same thing will happen during the Eddy Minimum. 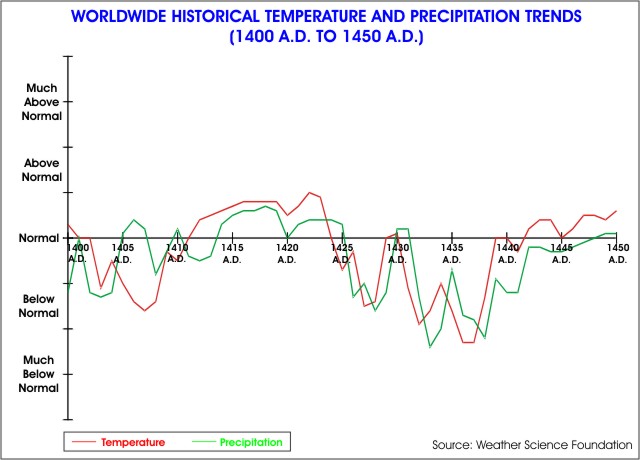 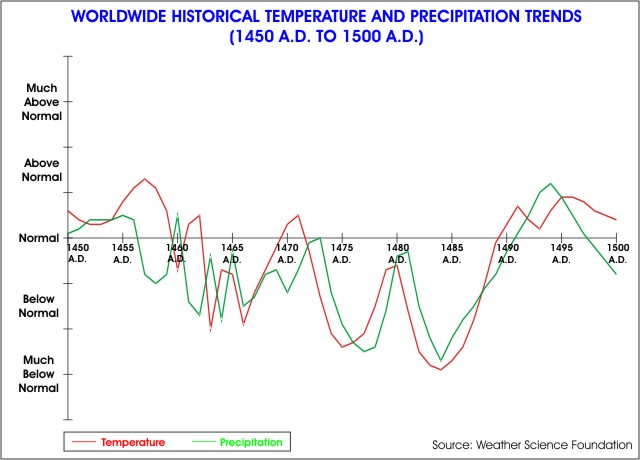 Fantastic work as always my Anomalous friend! I'm going to bookmark this site and I hope everyone checks it out. Thanks for sharing it!
Top

Any significance to this gif Howard?