What did you do to prepare today?

What did you do to prepare today?
Post Reply
364 posts
Message
Author

I too have been doing home repairs in the heat. Today I finally finished rebuilding the windows in our house. They were never flashed and I had to replace rotten sills and trim. It took two years to get all of them done. I've also been cutting and splitting firewood.
The chickens have cut back on their egg production due to the heat. It hasn't had a negative impact on sales but I'm cutting back on our personal consumption.
Now that the window repairs are done, I hope to find the time to build the black soldier fly digester. The pupae are 45% protein, 35% fat, and 5% calcium (biologically available). Ideally chickens should get 1/3 of their diet from grains, 1/3 from greens, and 1/3 from protein. That's hard to do in the winter when the ground is frozen so I'm planning on freezing the pupae and giving them to the birds later.
I'm also signed up for a 2-day foraging workshop in September. That'll be cool!
Keep on keeping on kids!
Top

Yeah it's crazy how a domestic pooch can turn so quickly back to a pack animal. We used to take our family dog out hunting wild boar once in a while and when the pack gets on some prey they are just brutal.

On the black soldier fly project - interesting stuff. It's too cold up here in Canada for them unfortunately. There is a yellow soldier fly but I haven't seen one. One day I would like to find the cold climate analog to the BSF for feeding chickens.

We have 16 hours of daytime right now and things are finally starting to get cranking. For example, the potatoes in the garbage bags I hilled 3 days ago are now 2 feet higher and need hilling again.

I'm continuing to form relationships and extend the local bartering network. One of the side effects of legalising pot up here is that a bunch of expertise, innovation, and infrastructure for growing food indoors is now coming out of the woodwork.
Top

We discussed mealworms and almost went with them but black soldier flies have other benefits. They eat biological wastes so we can feed them poop and roadkill. That means that I can speed up the decomposition of my chicken manure. I took a class by Chris Link who runs the farm at Southern Appalachian Highlands Conservancy where they use black soldier flies. He said that they can process 80 lbs of organic matter a day. He also said that the N in manure is reduced by 62%. That's important because that steep reduction will make it possible to run the manure through my worm bins faster than I would otherwise. Apparently black soldier fly residue isn't safe on its own as a soil amendment, so it's recommended to run it through the vermicomposting process.
That's fine by me because vermicompost is a fully stabilized soil amendment at a near neutral pH. It's microbially active, has a high water holding capacity, and has humic acids. It also has gibberellins, cytokinins, and auxins. Those are plant growth hormones. I've kept worms now for 6 years. I start all of my seeds in it and use it in all of our containers. I also make actively aerated compost tea with it and use it on my garden beds here as well as in other people's gardens.
All of that is a long way of saying that the black soldier flies meet other criteria as well as that of a protein source.
This is the link to the vid demonstrating the build that I plan on doing https://www.youtube.com/watch?v=J-XsU19U0kQ
Here is another link that I found interesting. This came from AgWeb and is a vid called "Weathering the Storm" about how farmers are coping with the cold wet year that may not change anytime soon. https://www.agweb.com/article/weatherin ... rm-report/
Top

We've been stocking up on food this week. I haven't seen any food shortages here, and I'm not complaining. Anyhow, I've spent the past two days canning peaches and tomatoes. I hope to finish processing the bushel of tomatoes tomorrow.
I started the black soldier fly digester but got sidetracked. I hope to get on that project again in the next couple of days.
Top

Have you ever been bit by a horsefly? It hurts like a mofo.
Top

Hard choice there Andy. North Dakota while I personally would find fun in surviving in, doesn't look like the best real estate going into the GSM and with ND/Minnesota having seen 8 blizzards between then. Plus the higher North, the more increased cosmic radiation as time goes on. Sounds like even more work especially with NK being one of the coldest winters in the Country.

On the other hand, Nebraska is getting a mega shit ton of rain and more hail too, but it's pobably where I'd choose out of the two as they're not seeing the same higher than average UV which has been providing nice florida like days, when there is sun of course. They're getting lots more rain than I am, and simply without a working gutter system for last 2 years it's gonna costs me many thousands to fix all the new damage. Since you are smart/resourceful I don't see this being a worry as you'll come up with something.

I've just been maintaining the garden myself - the insect killer pretty much mottled all of the tomatoes but a few are slightly untouched. Most have blooms and some small fruit budding but for the most part these Munchers are handling the excess rain like a champ. So all in all I'm a little more optimistic if carrots/lettuce/cucumbers are doing okay and the tomatoes too outside of my own issues.

Started a prototype air scrubber and just got done making my first big batch of activated charcoal. Gotta let it sit for 72 hours yet, but update when it's ready 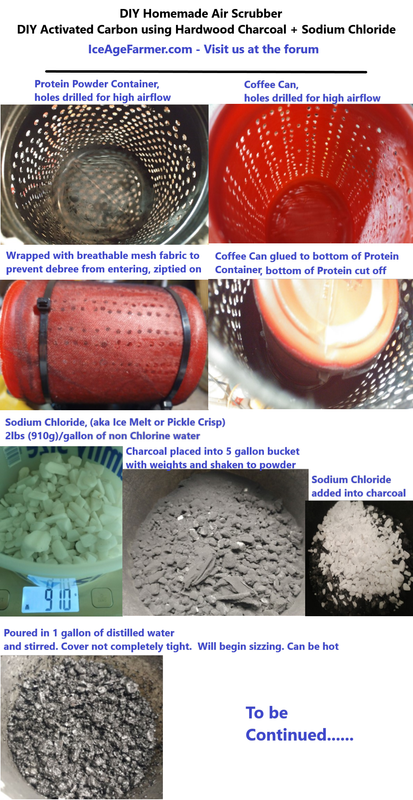 We experienced a weather event earlier in the week (rain, a drop in temp and humidity) which triggered a massive wild mushroom flush. Today I went and harvested a load of chanterelles, porcini, and pine boletes and the dehydrator is full.

I do this whenever the weather triggers a flush, and I store the dried mushrooms in sealed containers that I then use to trade for other things like honey, and wild game.

It's a great network builder

Posted every 7 minutes. Not even smart enough to build in variance lol...
Top

I am searching for a recipe for emergency survival bars that look nutritious, easily storeable and taste fantastic. I haven't found that survival bar, yet, but all in due time.

Taking care of my outside plants while deciding if, in 2020, I want to start my garden, indoors, in February. I cannot start squash in February. It will take over the house. But there are some, like tomatoes, that are easily done in February. I've started in Feb, in the past, and it worked out but they took over the house and it was a lot of work.
Top